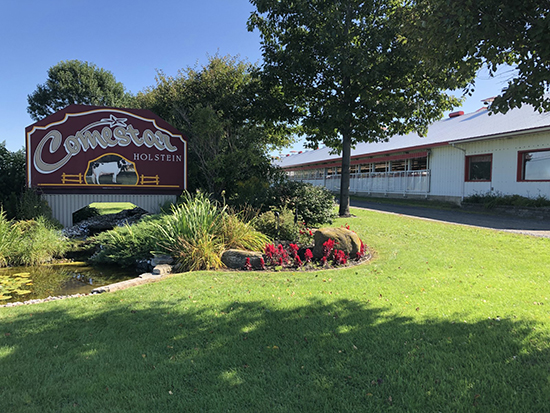 A pillar of the Canadian Holstein industry, Comestar Holstein is preparing for a new phase in its storied history, one which will see them move to voluntary milking powered by DeLaval VMS™ V300.

As well as an anticipated increase in yield, Comestar owners Marc and France Comtois, were very clear on the benefit of the new system for their much-envied Holsteins. “There will be more freedom and comfort for the animals,” says Marc.

It’s not just a case of putting in some new robots – it is the connection of those robots to capture and analyze more data, faster and more easily than ever before that will enable the Comtois family to make better decisions to improve the farm environment for themselves, workers and cows.

Marc also notes that with their new DeLaval VMS system, cows will most likely be less stressed. “It will be better for the animals. We’ll be able to see them getting sick before it actually happens.”

This predictive power is made possible by data captured at each milking by DeLaval Herd Navigator™ system, which performs automated milk analysis including progesterone levels. Every morning the Comtois family will receive information on each individual cow’s milking performance, health and reproductive status.

In one year from now, Comestar Holstein plans to be milking 350 cows with six VMS V300 robots in a new sandbedded freestall barn. The facility will be built to accommodate two additional VMS units.

“We are honored to be involved in the evolution of Comestar Holsteins’ plans for its dairy business,” says Francisco Rodriquez, Integrated Robotics, Manager for DeLaval. “With some of the best dairy genetics in the industry, we are excited to see how our technology pairs with the milking potential of the Comestar herd.”

Comestar Holstein, located in Victoriaville, Quebec. For four decades, owner Marc Comtois has traveled the world in his drive to propagate the most outstanding dairy genetics. His accomplishments as a Holstein breeder are legendary, beginning with his famous Comestar Laurie Sheik – the cow that launched the line and continues to deliver champion genetics seven generations later. Marc is a 2019 Canadian Agriculture Hall of fame inductee.